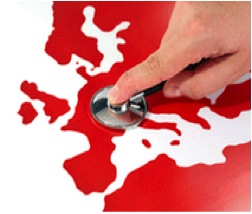 This article originally appeared at http://www.bcmj.org/blog/infectious-diseases-most-consequential-aspect-climate-changeThe single most pressing consequence of climate change, whether global or localized, will be in the shifting patterns and spread of infectious disease. Substantial alterations in temperature and humidity can directly relate to the distribution and
virulence of many microbial pathogens, no matter the underlying cause. This correlates with the rich complexity and diversity of all ecologies in which pathogens thrive. So shifts in the distribution of vegetation, the dispersal and range of animal predators or their prey, or distortions in the variety, concentration or specific strains of vectoring insects or other disease-carrying organisms can all influence the transmission of pathogens or their relative abundance.

SupportMany researchers believe that this effect can be currently observed. For example, malaria[1] spreading to the highlands in Africa and the northward spread of West Nile Virus[2] in the United States has been linked to the changing distribution of disease-carrying mosquitoes relating to climate change. So, too, have shifts in the spread of dengue fever[3] in endemic areas.A wide range of diseases are zoonotic in etiology so a shifting climate may enhance the likelihood of that cross-transmission or its virulence. There is evidence for just this type of consequential shifting pattern. Ecological variation has been ongoing over earth’s history, and that of man’s time on earth. Humans have been both victims of pathogens and carriers. For example, the loss of the North American large mammals like the woolly mammoth and saber-toothed tiger has been correlated by some researchers to a phenomenon termed hyperdisease[4]. In that instance, humans as carriers or our traveling companions, such as hunting dogs or domesticated animals, are thought to have introduced new pathogens or more virulent ones to an unprepared environment.ResponseHow then should this affect our global response to climate issues? It must begin with increasing awareness among climate scientists and physicians. However, there should also be a redirection of scant available resources from unproved expensive projects of carbon capture and sequestration to productive research studying the patterns of communicable disease. This might mean evaluating and implementing better means of mosquito, tic, and rat control; sharpening our tracking of current patterns of communicable diseases; and aggressive research into improved prevention or therapies. All would yield substantial benefits with certainty, whether a shifting climate is consequential now or in the future.–Bill Miller, MDReferences1.    Bouma MJ, van der Kaay HJ. The El Niño Southern Oscillation and the historic malaria epidemics on the Indian subcontinent and Sri Lanka: An early warning system for future epidemics? Trop Med Int Health 1996;1:86-96.2.    Morin CW, Comrie AC. Regional and seasonal response of a West Nile virus vector to climate change. Proc Natl Acad Sci USA 2013;110:15620-15625.3.    Hales S, de Wet Neil, Maindonald J, et al. Potential effect of population and climate changes on global distribution of dengue fever: An empirical model. Lancet 2002;360:830-834.4.    MacPhee RDE, Marx PA. Lightning strikes twice: Blitzkrieg, hyperdisease, and global explanations of the late quaternary catastrophic extinctions. American Museum of Natural History. Accessed 13 June 2014. www.amnh.org/science/biodiversity/extinction/Day1/bytes/MacPheePres.html.