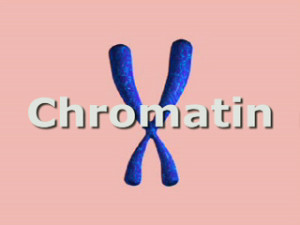 Chromatin represents the combination of both the DNA and proteins in a cell nucleus. This combined material can assume specific configurations. This chromatin architecture is currently viewed as having a critical role in controlling gene expression and DNA replication. The primary protein elements of chromatin, or histones, compact DNA and assist in mitosis. Epigenetic changes occur by complex interactions between environmental influences and the underlying protein structure and DNA of a genome, which can alter the configuration of chromatin or change how segments interact in their three-dimensional environment. Examples include DNA methylation and alternations to chromatin architecture through histone modification. It is believed that most epigenetic modifications to underlying DNA sequences, either through promotion of genetic expression or silencing of genetic sequences proceeds through alterations in chromatin architecture.

In general, it is currently considered that epigenetic changes to a genome are less stably heritable than base genetic heritability. That is, if a genetic change occurs to the underlying genetic code it is more likely to be stably transmitted to future generations than epigenetic changes, termed epialleles. These latter modifications are thought to be generally unstable. In addition, the fidelity of transfer if it occurs may not lead to exactly the same degree of genetic expression in a further population, termed variable penetrance. So the genetic expression potentiated by the epigenetic change may still persist, but be lessened or the new trait may entirely disappear in future generations. The process that appears to account for this is that most epigenetic changes are believed to act by modification of underlying chromatin architecture rather than the intrinsic DNA base sequences within that complex assembly. It has even been postulated that the protein histone elements of chromatin may even constitute its own form of code that offer cues and instructions for gene regulation and could then account for differing states of genetic expression and activity.

Yet, according to William Kelly at Emery University in a recent article on transgenerational epigenetics, some things are clear. Complex and overlapping epigenetic mechanisms build changes in chromatin architecture that are heritable. These changes can guide genetic expression in germline cells, and then guide chromatin architecture in the zygote. There is an “initiating event” that triggers these epigenetic processes. Some further maintenance mechanism assures that this altered genetic expression and activity is maintained through successive rounds of replication and reproduction. Further, there appears to be some ability to discriminate at the germline as to which epigenetic processes persist and which are expunged. All of these mechanisms are fully compatible with hologenomic evolution theory, as explored in The Microcosm Within. Importantly, such new scientific findings critically undermine the simplified paradigms of conventional of the Modern Synthesis and its unfaltering allegiance to unfettered natural selection and random genetic mutation.